The 48th meeting of the OIC Council of Foreign Ministers, hosted by Pakistan, was held in Islamabad on March 22 and 23 with the theme “Partnership for Unity, Justice and Development”. In addition to senior diplomats from OIC member countries, delegates from OIC observer countries also attended the conference. The topic of the meeting fully reflects the solution to the problems of the Islamic world, but the practical aspiration on this topic is the source of progress, growth and guidance to get out of the maelstrom of problems. A closer look at the long list of Islamic countries on the world map reveals their importance in terms of geography, natural resources, population and market.

Geographically, Islamic countries are divided into four continents, including 27 countries in Asia, 26 countries in Africa, and two countries Suriname and Guyana are in South America while Albania is a Muslim country in Europe. The world’s major sea lanes belong to the Islamic world and these seas are full of resources. Major shipping lanes connecting the world, including Bab al-Mandeb, the main entrance to the Mediterranean, the Suez Canal, Gibraltar, and the Strait of Hormuz are under the control of the Islamic world.

Toady Muslims own about 43% of the world’s land area. From Indonesia in the east to Morocco in the west, there is a long chain of Islamic countries rich in abundant natural resources, minerals, fertile land, commercial ports and the kind of raw materials for modern development. A glimpse of their natural resources is below.

Afghanistan, the battleground of the world powers, is a mineral-rich country. According to the United Nations, Afghanistan’s mountains alone contain 100,000 tons of gold, and copper reserves are also high. There are reserves worth more than 12 billion tons. Apart from the common minerals, nature has also enriched the Islamic countries, especially the Middle East, with important minerals like oil. Industrial development is entirely dependent on petrol in this era, 10 of the 12 largest oil-producing countries in the world are Islamic countries. Many unique types of precious stones, gas, coal and other important minerals are also found in abundance.

Despite the blessings of the aforementioned geographical and natural resources, the Muslim world today is in deep crisis, for several reasons but our concerns are, lack of quality education, dilettantism in modern scientific research, mutual disagreement and the role of OIC.

The tragic dilemma of history is that even after performing the great and valuable services of science, the Muslims forgot their research and scientific approach, and fell prey to the imitative and traditional mentality. As a result, they lag far behind the West in science and industrial development. The lack of modern science can be gauged from the fact that there are barely 200 scientists in a million Muslims, compared to 5,500 in a million Americans.

The Western world spends 5% of GDP on research and development, while the Islamic world spends only 0.2% on this purpose.

Professor Sehar Mustafa, a senior scientist at the University of Mansoura in Egypt, says that the majority of experts in Egypt and the rest of the Islamic world prefer to publish only dissertations on science so that they can thrive not for national development.

One of the prominent publishers in the world is The Nature, which has published over 100 important research papers from 1900 to 2021 but none of these authors belongs to Islamic countries.

These are the factors behind the weak global stature of Islamic countries and the fact that the OIC is a dysfunctional organization. Unity and cooperation are the need of the hour. Its practical beginning should be through the OIC platform for modern scientific research, the establishment of modern experimental laboratories and the promotion of quality education in the Muslim world. Industrial development is possible in the Muslim world with the advancement of modern science and technology because there is no shortage of raw materials in these countries, only a lack of experts and research. Industrial development will not only solve the economic problems of the Islamic world but also restore the identity of Muslims in the world. Prominent Malaysian chemist Dr Datu Ibrahim Jannat’s proposal is commendable in this regard he says that science is influenced by the West. Only strong leadership can bring together the scientists of Islamic countries. He suggested the formation of a think tank-style organization of scientists from Islamic countries.

With the commencement of cooperation in this field, the Islamic world can reach the horizon of development in the near future and ensure an effective solution to its problems at the global level.

It could be an efficacious tool of international political economy for influencing the problems of the Islamic world (Kashmir, Palestine, Afghanistan, Islamophobia etc.) as well as to free the international order from the monopoly of the West. But for this, first of all, it is necessary to enable the countries of the Islamic world to be able to convert raw materials into finishing goods, which is possible only with the advancement of modern science and technology. The existing platforms for the advancement of science and technology under the auspices of the OIC must be rejuvenated with some basic reforms. 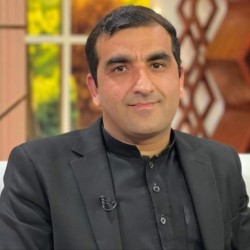